THE BULLDOGS MAKE A STATEMENT AT 2017 NHL DRAFT 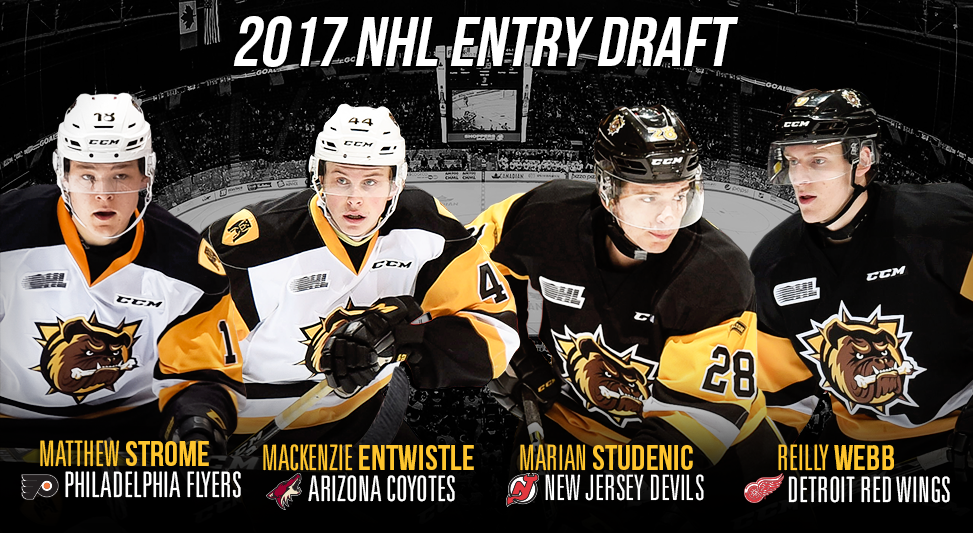 Day 2 of the 2017 NHL Draft in Chicago will go down as a day to remember for the Hamilton Bulldogs organization.

After just two seasons in the Ontario Hockey League, the Bulldogs saw four players drafted by NHL teams on Saturday.

Next to Owen Sound who had six players drafted, the Bulldogs, Guelph and London were the next best in the OHL with four players selected.

For Entwistle, it was the perfect finish to a wild season. Off to a good start that included a goal and an assist at the CHL Top Prospects game in January, he then missed more than a month with mono. However, Entwistle finished strong as one of the Bulldogs best players in the playoffs and then led Team Canada in scoring at the U-18 Championship in Slovakia.

Matthew Strome was the next Bulldog chosen, a 4th round pick by the Flyers. The big forward had been projected to go higher in the draft, but told the Philadelphia media that’s the way the draft goes sometimes. He says he’s going to use it as motivation and will play wherever the coaches want him to play. Strome led the Bulldogs in scoring last season with 34 goals and 62 points and had 8 points in seven playoff games.

In the 5th round the New Jersey Devils picked Marian Studenic. The Slovakian scored 18 goals in his rookie season in the Ontario Hockey League. Studenic also has plenty of international experience having played for Slovakia on several occasions, suiting up for the U17’s, U18’s, and U20 World Jr. Hockey Championship.

Depending on who you talk to, (certainly not Bulldogs fans) the biggest surprise came in the 6th round when the Detroit Red Wings called out defenseman Reilly Webb’s name. Injuries have limited the Stoney Creek native to just 20 games over the last two seasons, but scouts were impressed with Webb’s game when he was on the ice, especially during last season’s first round playoff series against Kingston.

Prior to the 2017 Draft, the Bulldogs had only one player selected by an NHL team on draft day. That was defenseman Cole Candella picked in the 5th round by the Vancouver Canucks in 2016.