THREE BULLDOGS ON THE RADAR AT THE NHL DRAFT 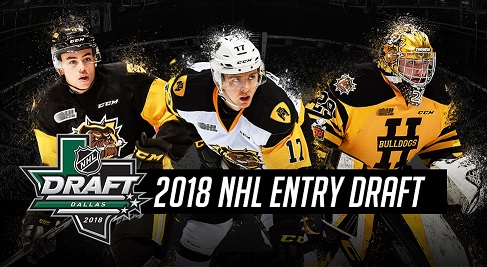 Three Hamilton Bulldogs are hoping to hear their names called at the NHL Draft in Dallas, Texas this weekend.

After two break-out seasons with the Bulldogs, Brandon Saigeon was 147th on the NHL Central Scouting’s final North American Skaters rankings while a great season propelled Isaac Nurse onto the list for the first time at 180th overall. Nick Donofrio was 31st on the North American Goaltenders List.

Saigeon was passed over in his draft year, but has come into his own with the Bulldogs the last two seasons. The 20-year old native of Grimsby, ON, set career highs for goals (35), assists (35) and points (70) during the regular season.  Brandon was also among the league leaders in Game Winning Goals (9) and Power Play Goals (16). Brandon picked up where he left off scoring another 18-goals in the playoffs helping to lead the Bulldogs to an OHL Championship and an appearance in the 100th Mastercard Memorial Cup.

Hard work put Nurse on the list for the first time. Isaac scored Hamilton’s first goal of the 2017-18 season and went on to register a career high 17 during the regular season. The Hamilton product was a +14 as the coaching staff never hesitated to use him in any situation. Nurse was also an easy choice when it came time to name the Bulldogs Hardest Working Player of the Year.

Donofrio earned the back-up job during training camp and certainly showed he deserved it. The 18-year native of Ypsilanti, MI had a 11-1-0-1 record in his rookie season, including 1 shut-out during his 17 appearances with a Save Percentage of .884 and a Goals Against Average of 3.14.