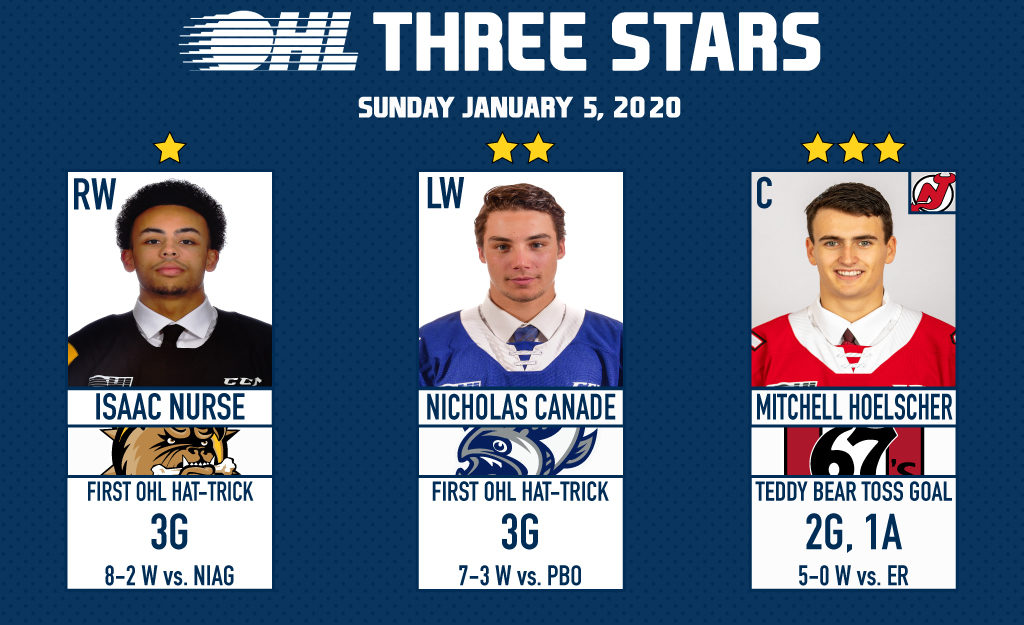 1ST STAR: ISAAC NURSE (HAMILTON BULLDOGS) – 3G
In his fifth game back from injury, Hamilton Bulldogs captain Isaac Nurse completed his first career hat-trick in his team’s big 8-2 win over the Niagara IceDogs on Sunday afternoon. The overage winger struck in the final 30 seconds of the opening frame to give the Bulldogs a 2-0 lead, as well as in the second and third periods. Nurse now has eight goals and one assist for nine points in as many games, and has amassed a total of 75 points (43-32-75) over his four seasons with the Bulldogs.
• HIGHLIGHTS

2ND STAR: NICHOLAS CANADE (MISSISSAUGA STEELHEADS) – 3G
Mississauga Steelheads winger Nicholas Canade recorded his first OHL hat-trick in a 7-3 win on home ice. The 19-year-old winger scored 2:43 into the opening frame and twice in the third period, rounding out his team’s big win. Through his third season with the Fish, Canade has 10 goals and 13 assists for 23 points in 31 games, surpassing last year’s career-high 22 points in his 63-game season. He attended training camp with the New Jersey Devils in September.
• HIGHLIGHTS

3RD STAR: MITCHELL HOELSCHER (OTTAWA 67’S) – 2G, 1A
Mitchell Hoelscher’s 19th and 20th goals of the season came in a three point performance that helped propel the Ottawa 67’s to a 5-0 blanking of the Erie Otters and a 16th straight win. The New Jersey Devils prospect was Ottawa’s teddy bear toss scorer, finding the back of the net 8:43 into the game. He scored again 7:30 into the second period to lift his team up 3-0, and collected an assist on rookie Jack Beck’s goal midway through the final frame. The 19-year-old centreman has now recorded three points in his last two games, and has amassed 20 goals and 21 assists for 41 points through his fourth OHL season. Hoelscher was selected by the Devils in the sixth round of the 2018 NHL Draft.
• HIGHLIGHTS 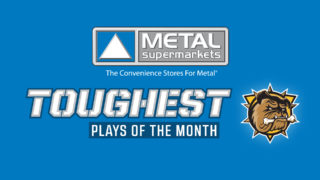