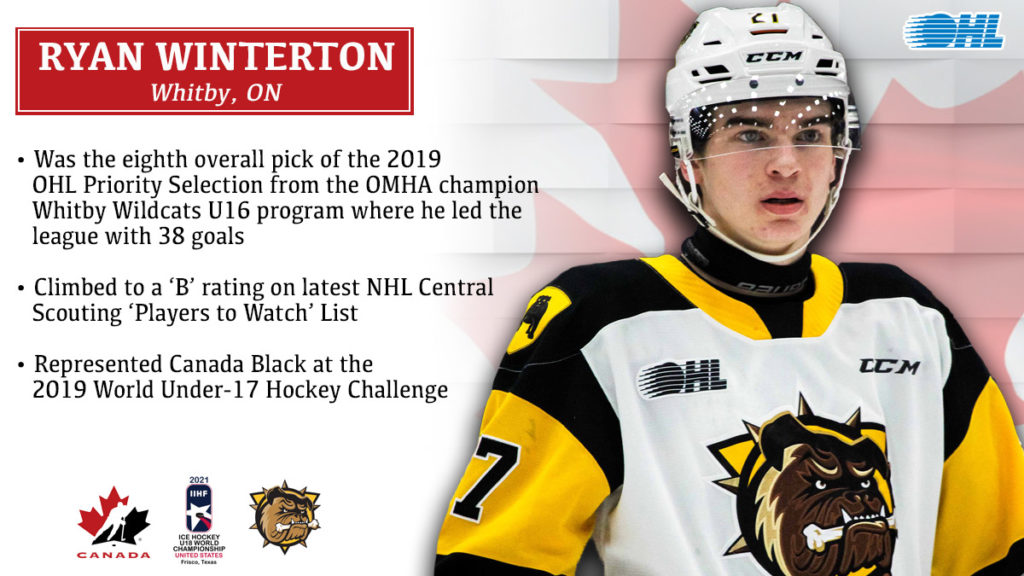 A reliable two-way centre lauded for his character and versatility, Ryan Winterton of the Hamilton Bulldogs will suit up for Team Canada on the international stage in Texas alongside 12 other OHL forwards.

ROOKIE NUMBERS
The now 17-year-old provided an offensive boost alongside the talents of Arthur Kaliyev and Jan Mysak over his 2019-20 rookie campaign, having collected a respectable 12 goals and 11 assists in 53 games. The Whitby, Ont. native was selected eighth overall at the 2019 OHL Priority Selection out of the Whitby Wildcats organization following a 72-point minor midget production (38-34—72) and five-point (2-3—5) showing at the 2019 OHL Cup.

MOVING UP IN THE RANKS
Listed as a C grade prospect in NHL Central Scouting’s preliminary ‘Players to Watch’ list, Winterton was bumped up to the B ranks come January.

BACK ON INTERNATIONAL ICE
The 11-day tournament sees the budding Bulldog return to the international ranks following a stint with Team Canada Black at the 2019 World Under-17 Hockey Challenge where he picked up three assists in five appearances.

Winterton and 12 other OHL players will hit the ice in Plano and Frisco, Texas on April 27th when Canada opens its tournament schedule against Sweden.