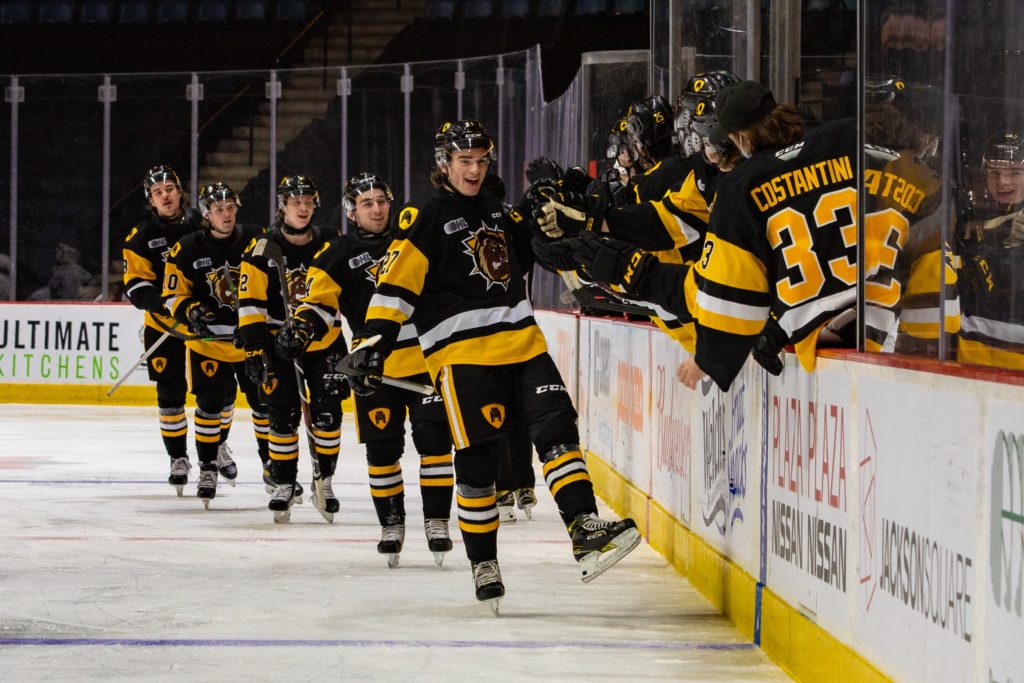 HAMILTON, ONTARIO. The Bulldogs were back on FirstOntario Centre ice after a 12-day hiatus and were more than ready to play their first game of 2022. Facing off against their QEW rivals, the Niagara IceDogs, the Bulldogs were looking to extend their season series advantage to 5-0. Tonight’s lineup looked a lot different with Mason McTavish and Arber Xhekaj making their debuts as Bulldogs and the long-awaited return of Ryan Winterton.

The first period Winterton showed us what we missed by not only scoring the first goal but getting his first point and goal of the season with a backdoor rebound off an Arber Xhekaj point drive, his first point as a Bulldog, at 3:05 with Gavin White picking up the secondary assist. With 8 minutes left in the opening frame Matteo Drobac kept the net locked down with a wicked split save to keep the score 1-0. After 20 minutes of play the Bulldogs had set pace of play and held the only goal of the game.

The Bulldogs took control from puck drop of the second period creating a series of chances led by McTavish who danced through the IceDogs defense for a cross ice pass to Jan Mysak to score his 18th of the season at 4:29 with the help of Winterton for his second point of the game. The Bulldogs new line continued to impress with Winterton passing to Mysak who sent McTavish the puck at the top of the right-wing circle to rip it into the Niagara net for his first goal as a Bulldog at 8:59. In the Bulldogs end Drobac made another amazing save to keep the net locked down splitting across his crease on Liam Van Loon’s backhand. Patrick Thomas joined the scoresheet and Winterton set up the cycle for a little tic tac goal action with George Diaco left scoring his 12th goal of the season at 15:32, giving the Bulldogs a 4-0 lead. With less than a minute left Diaco headed into a 1-on-2 to gain possession in the right-wing corner to send it out-front for Logan Morrison who ripped the shot through the Niagara net with Ryan Winterton picking up his 5th point of the night. The Bulldogs lead the game 5-0 headed into the third.

The Bulldogs headed into the third period with the game in control, but the IceDogs wouldn’t quit with Danil Gushchin breaking Drobac’s shutout at 3:08 on the Bulldogs penalty kill. Morrison came right back to tap it in the backdoor to get his second goal of the game from the pass of Mysak and play from Noah Roberts at 8:40 to make the game 6-1. The battle wasn’t finished yet with Niagara scoring their second of the game at 12:38 from Juan Copeland for his second goal of the season. The Bulldogs kept control of the play for the remainder of the game, ending it with a powerplay and the final score of 6-2 for their first win of the new year and Ryan Winterton making a statement with 5 points in his return.

The Hamilton Bulldogs return to action travelling to the Tribute Communities Centre to face the Oshawa Generals Friday night at 7:35pm.