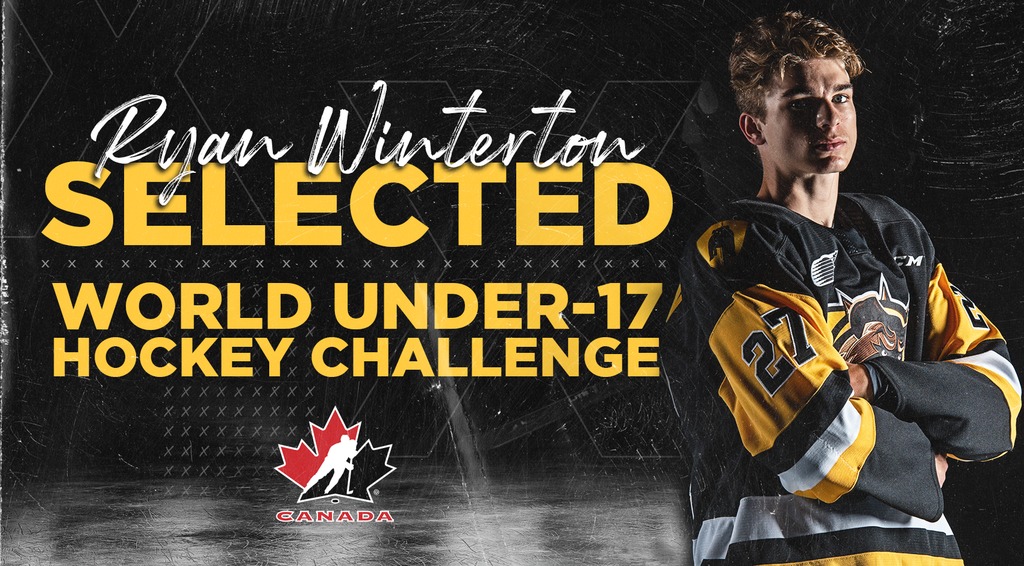 Representing Team Canada Black at the 2019 World U-17 Hockey Challenge Hamilton Bulldogs’ forward and 2019 1st Round Pick, Ryan Winterton joined a team brimming with OHL offensive talents including fellow 1st Round selections Shane Wright, Brennan Othmann, Danny Zhilkin & defenseman Brandt Clarke, Winterton was still able to stand out amongst the crowd. Bringing his power forward stylings to the tournament, Winterton was more set-up man than finisher for the duration of the tournament, showing how his game is growing every time the talented 16-year old touches the ice. Team Canada Black would bow out in the quarterfinals but had a tremendous run during the tournament winning all three of their preliminary round games in dramatic fashion, with all three coming in overtime or shootout situations.

Opening the tournament on November 2nd, Team Canada Black would have a showdown with Team Canada White. In the second period of the contest, after Mason McTavish had recorded a pair to put White up 4-1, Winterton helped spark the comeback. With Team Canada Black on the power-play it was Winterton, off a Zhilkin pass, who found Zach Dean to give the Black side life making it 4-2. Dean would eventually end the game in overtime for a 6-5 Team Black victory.

Team Canada Black’s second test would come in the form of the Czech Republic on November 4th. The game was a back and forth battle with the teams trading the lead early and Canada Black battling back from a one goal deficit three times throughout the contest. Winterton’s moment in the sun would come early however, at 14:51 of the first period he noticed a streaking James Malatesta striding in behind the Czech defense. With two defenders between Winterton and his target he would pull off a perfect aerial pass, scooping the puck high into the air over the Czech defenders and landing it perfectly for Malatesta to stride onto for the opening goal of the game. Once again Winterton showed off his increased confidence and willingness to use every part of his skillset to challenge opposition defenders. Again, Team Canada Black would take the game to extra time after Zhilkin tied the game with 1:18 to play, with overtime solving nothing Brandt Clarke would record the eventual shootout winner.

Closing out the preliminary round on November 5th, Team Canada Black faced down a rivalry matchup with the United States providing the opposition. Once again, the teams would trade the lead throughout the game multiple times, and once again Winterton would make the most of his moment just 4:28 into the game. Winterton again showing great chemistry with line mate James Malatesta who opened the scoring on Winterton’s third assist of the tournament. After Zhilkin once again tied the game late, this time with 1:12 to play, Shane Wright would win the game in overtime for Team Black putting them at 3-0 and setting the stage for a quarterfinal matchup with Russia.

Unfortunately for Team Canada Black the winning ways would halt, as they would drop their quarterfinal game to Russia and placement game with Finland both by 8-4 finals.

Ryan Winterton finished the tournament with three assists over his five games played, and now returns to the Bulldogs with confidence high, ready to take his game to yet another level and help the Bulldogs bolster their offensive production once again.