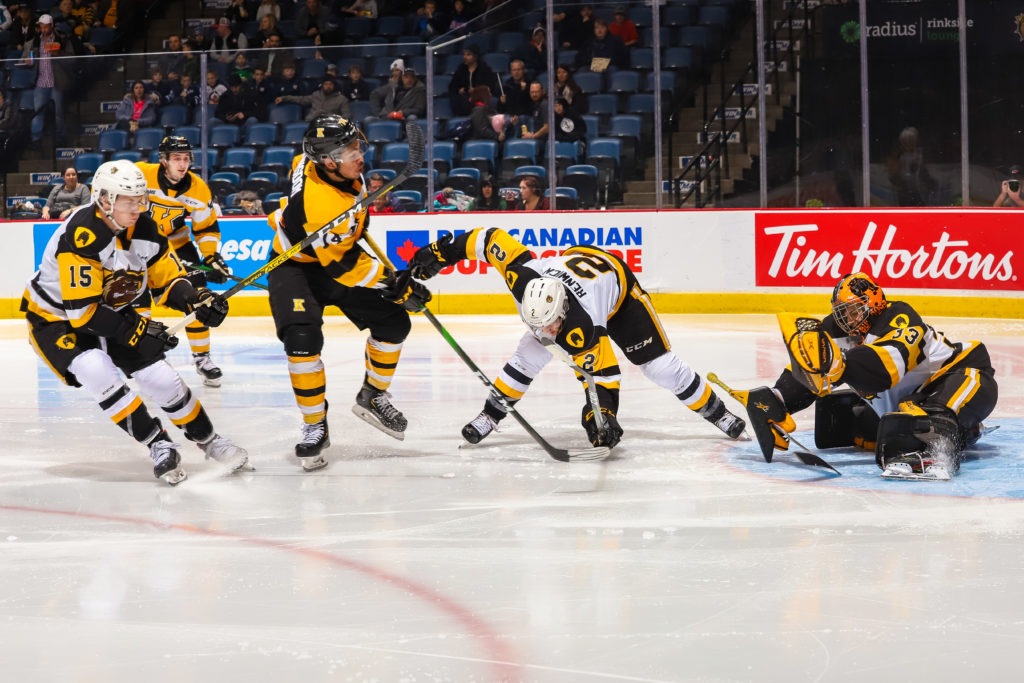 In a rare Monday night clash serving as the make-up game for the January 17th matchup between Hamilton & Kingston, it was the Bulldogs that got off to a quick start. Just 3:09 into the game, with Bulldogs in control of the puck in the offensive zone, Michael Renwick would exchange with Cameron Supryka going from right point to left, at that point Jan Mysak would slide out high between the two defensemen at the middle of the blueline, taking the pass from Supryka and scoring his 1st goal in the Ontario Hockey League to give the Bulldogs a 1-0 lead. Mark Duarte would have the best two chances of the period following the Mysak goal but Ryan Dugas would stop 14 of 15 Hamilton shots, while Marco Costantini would stop all 7 he faced in the opening frame keeping the Bulldogs ahead by a goal after 20 minutes.

The second period wasn’t as kind to the Bulldogs as the Frontenacs would outshoot Hamilton 9-8 in the frame and equalize in the later stages of the frame. With Navrin Mutter & Jakob Brahaney sitting in the penalty box serving matching roughing minors and the game 4-on-4, Jordan Frasca would find the puck loose in his own zone, flipping ahead for Vitali Pinchuk who would race down the right side and find defenseman Jake Murray joining the play late for the goal, his 3rd of the season, to tie the game 1-1 at 16:12. Just moments later, Pinchuk would find himself with a pair of sparkling chances to take the lead for Kingston but back-to-back saves from Marco Costantini without his stick would keep the game tied as the second period came to a close.

The third period would see the Frontenacs pour on the pressure, out-shooting the Bulldogs 13-8, assists by 6 minutes in power-play time, 4 of which coming on a questionable high sticking review against Nathan Staios, but the Bulldogs would handle the pressure with Tag Bertuzzi, Logan Morrison, Arthur Kaliyev & Jan Mysak all creating chances late but the game would need extra time with Dugs & Costantini both standing their ground.

In overtime, Logan Morrison & Tag Bertuzzi would have a two-on-one chance in the first rush, with Bertuzzi pulling the puck to the slot and trying to beat Ryan Dugas over his blocker hand. Dugas would instead punch the puck past the Bulldogs forwards, sending Shane Wright & Martin Chromiak on a two-on-one of their own. With Chromiak carrying the puck on the right, he would feed Wright on the left for a one-timer that alluded Costantini, giving Kingston a 2-1 overtime victory.

The Hamilton Bulldogs will return to action on Friday, January 24th, with a visit to Budwiser Gardens in London to take on the Knights at 7:30 followed on Saturday, January 25th with a key conference matchup at Sadlon Arena against the Colts at 7:30 before the team returns home for a matinee on Sunday, January 26th at FirstOntario Centre hosting the Peterborough Petes for a 1:00pm puck drop.