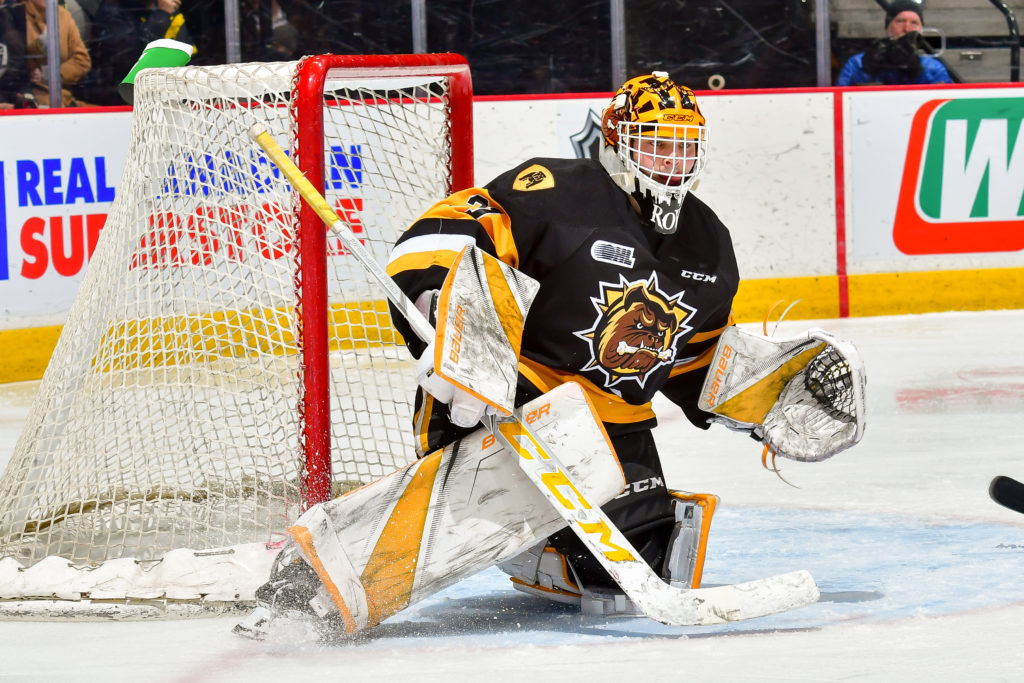 Behind the first ever OHL shut-out from Hamilton’s rookie goaltender Zachary Roy, the Bulldogs blanked the Kingston Frontenacs 4-0 Saturday night at FirstOntario Centre.

Not much happened in a scoreless 1st period…in fact it wasn’t until the 13:40 mark of the 2nd period that Liam Van Loon (3) opened the scoring picking up the puck just inside his own blue line, crossing into the Kingston zone and then letting go a wrist shot, high stick side, to give the Bulldogs a 1-0 lead. Hamilton only had one power-play in the game, but they made it count as Matthew Strome (19) tipped in a pass from Arthur Kaliyev to finish two periods up 2-0.

Two more Hamilton goals in the 3rd period just over two minutes apart as Kade Landry (3) took advantage of a center ice turnover and went in and made no mistake with a wrist shot to the top left corner followed by a nice finish from Logan Morrison (5) on a two-on-one to make the final 4-0.

With the win, the Bulldogs have now recorded points in seven of their last eight games with a record of 5-1-1-1 improving their season record to 20-19-3-1 while Kingston falls to 11-30-1.

The Bulldogs begin a stretch of four straight on the road Thursday January 17th as they play the Niagara IceDogs at the Meridian Centre in St. Catharines.  The next home game at FirstOntario Centre is Saturday, January 26th at 4 pm against the Mississauga Steelheads.