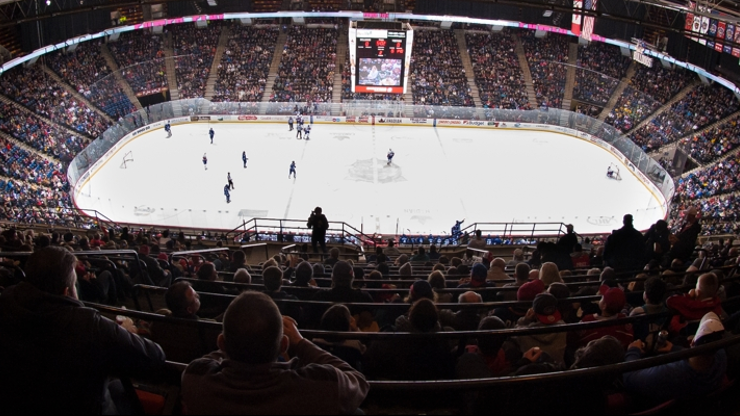 HAMILTON, ONT. – Hamilton Bulldogs Owner Michael Andlauer announced today the official sale of the American Hockey League (AHL) franchise to the National Hockey League’s (NHL) Montreal Canadiens which will take place at the conclusion of the 2014-15 AHL season. Andlauer also announced the purchase of the Ontario Hockey League’s (OHL) Belleville Bulls who will be relocated to Hamilton and renamed the Bulldogs for the start of the 2015-16 season.

“I want to thank my partner Geoff Molson, Marc Bergevin and the rest of the Montreal Canadiens organization not only for the great crop of prospects that we have groomed here in Hamilton over the last 11 years, but also for facilitating the relocation of their AHL team to St. John’s to make this possible,” said Andlauer. “Memories like the Calder Cup championship in 2007 and the Outdoor Classic game in 2012 are permanently entrenched in our minds and won’t soon be forgotten.”

Andlauer added, “I want to thank AHL President and CEO David Andrews for expediting this transaction and accommodating these moves in such a short time frame. I also owe OHL commissioner David Branch and the league’s board of governors a great deal of gratitude for entrusting Hamilton and our community as a new player in the league. This transition today allows us to move forward with a more permanent solution for our fans and an answer to the long-term health of hockey in Hamilton. We’re very excited about joining the OHL for the 2015-16 season.”

“Michael Andlauer is well known for his commitment to both the game and the community, and we welcome him to the OHL family,” said David Branch, Commissioner of the OHL. “Hamilton has a long and storied history in junior hockey and we look forward to building on this tradition starting next season.”

The Red Wings (1961-62) and Fincups (1975-76) each won the Robertson Cup as OHL Champions and went on to win the Memorial Cup in their respective seasons. Hamilton teams were also league finalists on four occasions (1958, 67, 75 and 78). Hamilton co-hosted the Memorial Cup in 1962 along with Guelph and Kitchener. The City also hosted the 1990 Memorial Cup at FirstOntario Centre (formerly known as Copps Coliseum). The highest attended game in Memorial Cup history to date remains the final game of that tournament between the Kitchener Rangers and Oshawa Generals (17,383) despite the lack of presence of a host team.

The trophy that the OHL awards to the team that finishes the regular season first overall has been named The Hamilton Spectator Trophy since the 1957-58 season. Hamilton also hosted the 1986 World Junior Championship at FirstOntario Centre (then known as Copps Coliseum).

The Bulls drafted Grimsby native Brandon Saigeon from the Hamilton Jr. Bulldogs fourth overall in the OHL’s 2014 Priority Selection. As a 16-year-old in the OHL this season, Saigeon has registered 23 points (eight goals, 15 assists) and 46 penalty minutes in 56 games. There are also three other local players on the Bulls current roster, including Stephen Harper (Burlington), Matt Luff (Oakville) and Niki Petti (Welland).

The AHL’s Hamilton Bulldogs Hockey Club will be remembered as the city’s first and only team to date to win a professional hockey championship. The team was first established in 1996 after the Edmonton Oilers relocated their farm team from Cape Breton. The Quebec Citadelles merged with the Bulldogs in 2002-03 and after a season of duel affiliation with the Montreal Canadiens, the team officially changed affiliations from Edmonton to Montreal at the start of the 2003-04 campaign. In the summer of 2004, Andlauer bought out most of the minority shareholders of the team to become majority owner and governor, and eventually sole owner of the team.

The Bulldogs, who will finish their 19th AHL season in 2014-15, have reached the Calder Cup Final three times to date, including the club’s first season, again in 2003 and in 2007 when they were crowned Calder Cup Champions for the first time. On all three occasions, the Calder Cup deciding game was played at FirstOntario Centre (then known as Copps Coliseum).