On his feelings after his debut and first NHL goal

It was a really special moment, getting the first one. You never forget those moments, getting your first goal. I thought it was a pretty good game, a lot of nerves at the start of the game, but I tried to play my best out there and picked up a rebound goal.

On when he started to shake the nerves and settle in
I was just trying to get used to the game pace, and get involved in the game more, try to get more up to speed. I think every shift we got better as the game went on.

On what he saw on the play leading up to his goal
Drew was skating down the wall, and I saw that I was the third man high. I saw [Amadio] get it off the pad and I thought I was going to see a rebound there. Next thing I knew, I got lucky enough that the rebound popped right to me and I was able to bury it.

On what caught him most by surprise about an NHL game
Just more game speed, more physicality, more skill guys out there, of course. I think pretty much that’s what I’ve noticed so far. 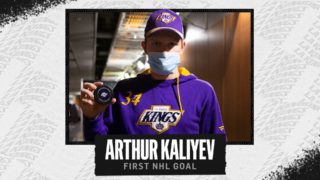